3 Common Shooting Techniques that are WRONG! 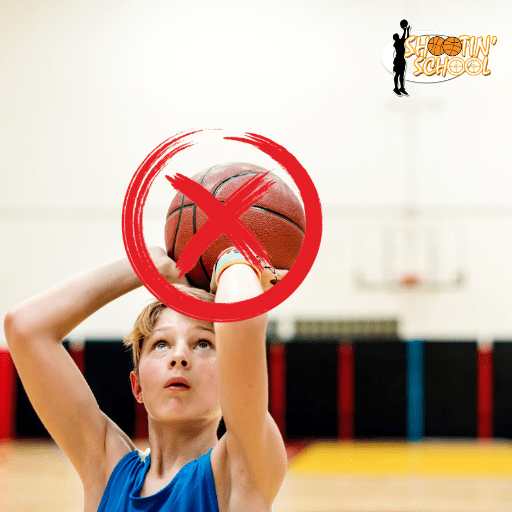 For as long as I can remember (for years and years now), I’ve been studying the art of shooting. I’ve traveled far and wide to observe how others teach young basketball players how to play the game. I’ve learned some really awesome stuff. However, I’ve also recognized that some trainers are teaching players based on some of the cliched techniques that they hear and see on TV!
Ultimately, it’s not that what they say on TV is incorrect; the issue lies in that young players have a tendency to take what they’ve heard literally. The terminology used on TV is not effective for teaching young players! In this post, be ready to learn about a few tweaks in terminology and technique that will help you shoot at a higher percentage.

Before we jump into the solution, let’s bring to light the terminology that has started the problem. If you’ve heard any of the following cliches, you may be falling into the traps that I’m referring to!

“Wait! What??? This is wrong???” Well, the concepts behind these cliches are correct, but for a young player, it can be super confusing! Let’s break each one down!

Here is the issue – after hearing this most player will literally take the ball and put their shooting arm in the shape of an “L”. Now that is incorrect! No one does that! NO ONE! In basketball, we have what is called the shooting pocket, it’s the place where a player is supposed to bring the ball prior to taking a shot. The shooting pocket (or shot pocket) is on the player’s strong side and the ball should be up around the shoulder area. The player’s elbow should be at an acute angle; more like a “V” than an “L”. Ready for the twist? If a player sets the ball in his/her shooting pocket and in one fluid motion takes a shot, somewhere in the interim they will find that their arm DOES hit that “L” shape! Nice job! That’s what those guys on TV are talking about. What’s wrong with starting with an “L”? A simple answer to this question… POWER! …. Think about this… if you take your arm and move it from the shape of an “L” into the shape of an acute “V”-like position (over and over again), THE DISTANCE BETWEEN THE TWO REPRESENTS ALL THE POWER THAT YOU ARE LOSING WHEN YOU START WITH AN “L” SHAPE! Just think about the distance you’ll be able to get on your shot now! Time to start stretching your range!

2) “When you shoot, you must have space between your hand and the ball.”
This has always been tough for me to understand. However, I figured it out! Again, players take what they hear literally, mostly because they’re striving for perfection in an effort to improve their game. So if a player hears, “Hey, you need to have space between your hand and the ball when you shoot. You’re not supposed to use your palm.” The player is going to do exactly what they are told. Usually, this leaves players holding the basketball on top of their fingertips. Maybe even the pads of his/her fingers. Ultimately, that is too much space. Of course, players aren’t supposed to use their palm when they shoot, we all know that (I hope). But it’s not okay to exaggerate to the point of only using fingertips and pads (or fingers) to shoot! It’s extremely difficult to control that! The amount of “space” that you need between your hand and the ball is so minuscule, that it’s almost not worth mentioning. The majority of players wouldn’t even think of shooting with their palm! If they do, simply hearing “stop shooting with your palm” will solve the problem. Using that terminology will reduce the chance of getting into a bad habit! When you are practicing to shooting, simply put your hand flush on the basketball keeping it relaxed, and shoot without using your palm. When keeping your hand relaxed, you will notice that there is a TINY space between your palm and the ball. Again, that is what your favorite commentator on ESPN is talking about! Not the gigantic, over exaggerated space that some young players are using. By not shooting with TOO MUCH SPACE you will surely increase your shooting percentage. By having more of your hand on the ball, you are allowing for more control in your shot! You can’t beat that!

3) “Keep your elbow in when you shoot!”
Well, this one just drives me mad! When a young player hears this, you HAVE to expect one of two things. Either they will bring their elbow so far in that it will be pointing to their belly button – or – they are going to bring their elbow into the point where it will rest up against their ribs. Neither one is correct. It’s too tense, too uncomfortable, too tight. Shooters have to be comfortable and relaxed. There is no time for overexerting muscles and doing extra work!

The reason we hear this expression so much is because so many players keep their elbow too far out or “popped”. I understand that! However, having your elbow tucked too far it is just as inefficient as popping it out! Both crush your accuracy level! The proper shooting technique is not so much about “tucking” your elbow in, as it is about having your elbow UNDER THE BASKETBALL. With your elbow under the basketball, you can now assure that your shot will travel straight, as opposed to what happens when you are popped or tucked. In addition, your body will be much more comfortable! Ahh, nice smooth release! That feels good!

So, here’s the deal. When you hear the phrases discussed above, try to substitute them in your head with what people are REALLY trying to tell you. Usually, this is what they mean: